Every year, folks fret over what to give their favorite car crazed person. The Racerhead Gift Guide 2021 starts here with some prime choices.

We’re back with more fun models by Fine Work from Japan. These strangely stunted models are pretty good renditions of the race and street cars they portray.

Can a warped, stumpy model car be accurate at the same time? When they are model cars by Fine Work, the Japanese company, the answer is Yes!

If you look at the history of art cars, most are driven by big events. If a car owner has their choice, they’d almost always seek out a big event at which to get big attention. Big attention is exactly what drives art cars, so to speak.

Motorsport art by Last Corner defines attractive and inexpensive motorsport art posters matching iconic race cars and the tracks that made them great.

Let’s define art cars as vehicles used as a blank canvas for artistic decoration to draw attention. Most commonly, this is used for advertising and marketing purposes. High art on the original BMW art cars got noticed by the upper-income consumers BMW was working hard to attract as a “luxury” brand. This is about the not BMW art cars.

The BMW Art Car began with a simple idea in 1975. Paris auctioneer /sometime car racer Hervé Poulain wanted to compete at the LeMans 24 hour race. Not just compete, but compete in a car that was a rolling work of art, a very radical idea in motorsport. 18 BMW Art Cars later, you can get many as 1:43 models.

The BMW factory began the trend of decorating race cars as rolling art. Hervé Poulain, who first lured prominent artists to BMW, inspired more artists to join the party. Teams in other series’ liked the art car concept too. Many BMW art car models in 1:43 scale run by independent teams are available. 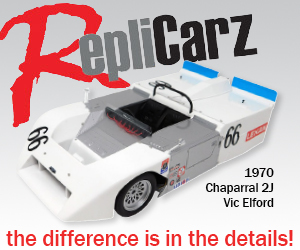 The history of handbuilt 1/43 racecars

F1 versus Indycar — Which is better?